The Community Advisory Committee (CAC) is an integral part of the CIHR Canadian HIV Trials Network (CTN). Members include people living with HIV and representatives of organizations fighting the epidemic. The CAC reviews each study submitted to the CTN to ensure that the researchers consider the priorities and concerns of Canadians living with HIV.

The CAC has 11 members; some have been on the committee for many years and others, just a few months, but all make valuable contributions to the CTN.

Let’s meet some of the longer-serving members 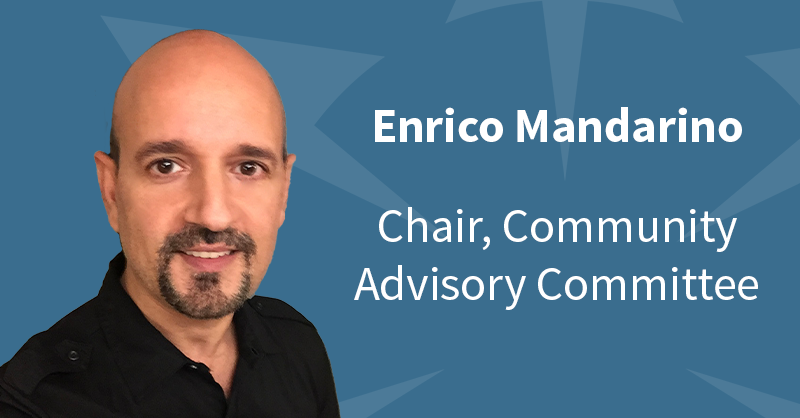 Enrico Mandarino chairs the CAC, a position he has held since 2019. He has over 25 years’ experience as a health care professional, working in diagnostic and clinical research, health policy, and quality assurance. For many years, Enrico has played important roles in cannabis research as an advisor, researcher, and participant. He has spearheaded cannabis public policy and helped set a research agenda. Throughout his life, Enrico has advocated for health equity, social justice, and human rights, with a focus on HIV/AIDS. His passion for the cause led him to become a Gay Men’s Outreach volunteer for the AIDS Committee of Toronto (ACT) in 1996, providing information on safer sex and referrals to the community. He then joined the boards of ACT, the Canadian Treatment Action Council (CTAC), and the Canadian AIDS Society. In 2020, while maintaining his position as CAC Chair, he became Community Co-Chair of the CTN’s COVID-19 Research Development Team. 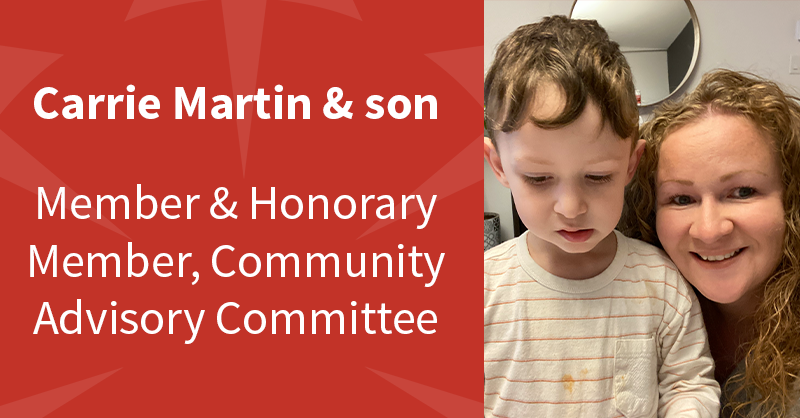 Carrie Martin is a Mi’gmaq woman from Listuguj who has spent the past 20 years working in the field of Indigenous women’s health, with a particular focus on HIV. She has been a member of the CAC for a number of years, and adds even more joy to our semi-annual meetings by bringing along honorary CAC member, her beautiful young son. Advocacy is a common theme among our CAC members and Carrie is a perfect example. She is a tireless champion for Indigenous women living with HIV. Following 12 years working as a Harm Reduction Coordinator at the Native Women’s Shelter of Montreal, she joined the Canadian Aboriginal AIDS Network as the Indigenous Women’s Research Coordinator. Carrie is a powerhouse in Indigenous academic research, currently working towards her PhD. She also builds much-needed capacity in the Indigenous community for grant and research development. 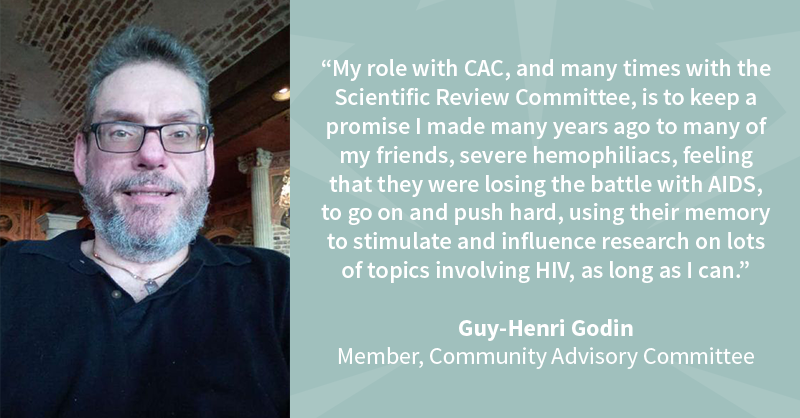 Guy-Henri Godin is the longest serving member of the CAC, representing the Canadian Hemophilia Society. More than 30 years ago, Guy-Henri received blood containing HIV and hepatitis C during hemophilia treatment. He was infected with both viruses. Before venturing down the route of HIV research and education, Guy-Henri practiced law and worked for Revenu Quebec. Since disclosing his HIV status soon after diagnosis, he has become an avid activist for hemophiliacs, particularly those who also received tainted blood. He has given over 100 interviews on radio and television and writes prolifically about life with HIV. He has also taught medical students about hemophilia, pain management, and living with HIV and HCV. Earlier this year, Guy-Henri wrote a piece for the CTN, The Team Player, offering a personal insight into his work and his other passion: HOCKEY! 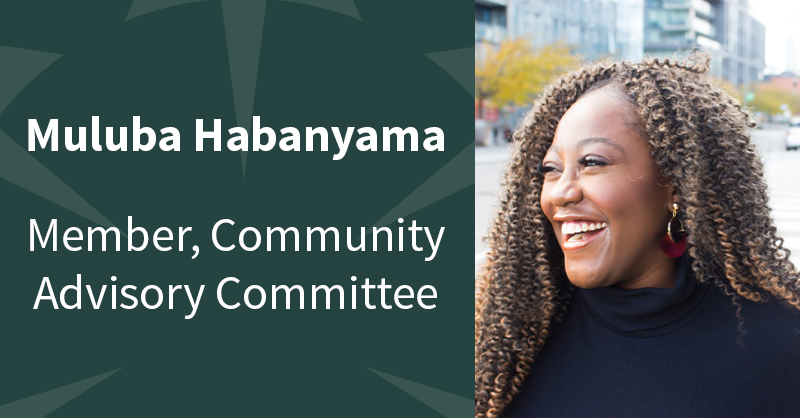 You may have heard of Muluba Habanyama. As a Black, female, youth who was born with HIV, she has become an international community activist and is passionate about the wellness and inclusion of all people living with HIV.

Muluba is a communications and advocacy specialist with expert knowledge in public speaking, writing, HIV, sexual health education, and content creation. Presently, she wears different hats including the Director of Communications and Advocacy at the Teresa Group, board member of the AIDS Committee of Toronto, ambassador of the Canadian Foundation for AIDS Research, and CIHR planning grant recipient. Aside from working with this sector, she has worked at the CBC and been published in the Huffington Post, Maclean’s magazine, Flare magazine, and MTV. 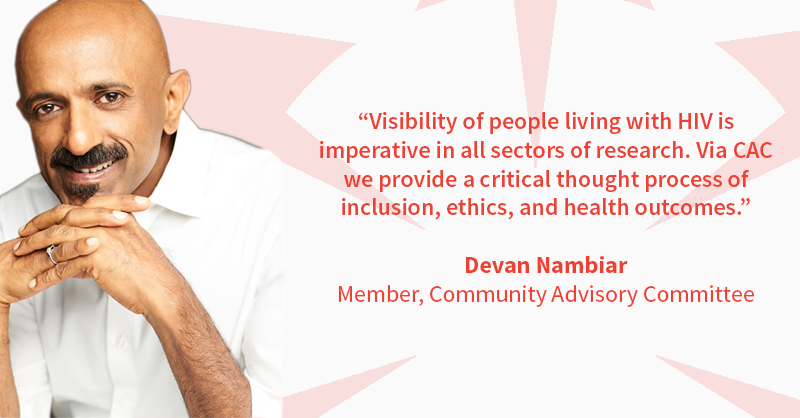 For more than two decades, Devan Nambiar has been working to support sexual and gender minorities — the 2SLGBTQ+ community, ethno-racial communities, and the men who have sex with men/HIV sector. He is currently the manager of capacity building and talent development at Gay Men’s Sexual Health Alliance. In his previous role as program manager and education/training specialist at Rainbow Health Ontario, he co-authored and launched the seven online LGB2SQ Foundation Courses, and trained up to 600 health care and social service organizations on 2SLGBTQ+ clinical and cultural competencies. He has also been involved in education and research, training health care providers on 2SLGBTQ+ cultural and clinical competencies, and acting as co-investigator on studies including the national Trans Needs Assessment Project and an HIV and ethno-racial MSM research study.

Today, in addition to his role on the CAC, Devan is serving on a few committees, including the Patient and Community Advisory Committee at the Canadian Agency for Drugs and Technologies in Health, Caregiver Mental Health Working Group of Ontario Caregiver Organization, and the Community Advisory Board of vPrEP. He is also co-chair of Burden of COVID on People Living with HIV, and provides consultancy services at Global Health Integrative Science, which he also founded. Devan has launched a new website for people living with HIV, Positivelove.ca. With eight welcome languages, the site provides a safe space for social networking, dating, and building Positive love communities across the globe. 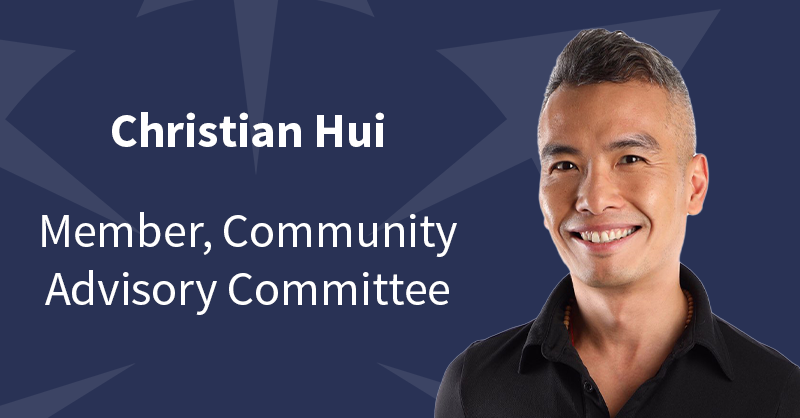 Christian Hui is a cisgender queer poz Asian settler activist residing in the Dish with One Spoon Territory on Turtle Island/Toronto. A registered social worker, they have over a decade of professional experience in the HIV and harm reduction sectors supporting diverse populations both locally and internationally.

Christian is a co-founder of both Ontario Positive Asians and the Canadian Positive People Network. They are a board director of the Interagency Coalition on AIDS and Development and a Champions team member of the Toronto to Zero Fast Track Cities Initiative, as well as a senior global community advisor at Prevention Access Campaign. They are also one of the resident filmmaker artists for “Walking in These Shoes,” a documentary short about poz BIPOC folx currently in production.

Christian’s experience in HIV research includes working as a community investigator on CTN 242, an experience that led them to realize that researchers often still need to better comprehend how to authentically respect, meaningfully engage, and support the genuine building of capacities of people living with HIV/AIDS. Such realization motivated them to apply for the CAC. In their role, Christian is committed to ensuring the experiences of community members are not tokenized, and more importantly, that the studies do not cause harm through reviewing proposals submitted to the CTN.

Christian is a CIHR Vanier Scholar pursuing a PhD in Policy Studies at Toronto Metropolitan University. 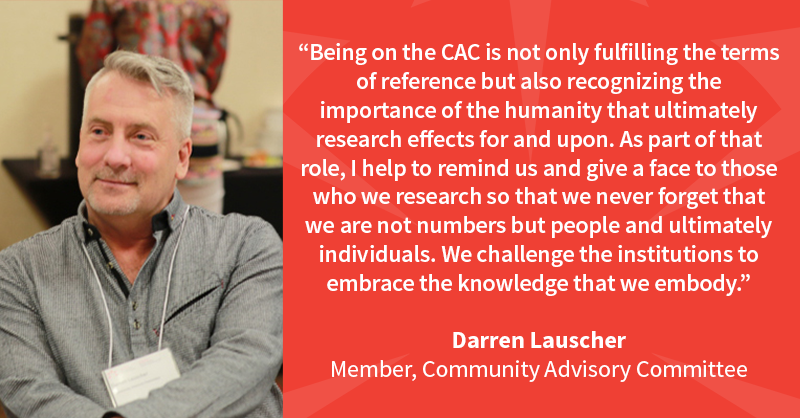 Darren Lauscher has been an active volunteer in the HIV movement since the mid-nineties and a member of the CAC since 2018. Seroconverting in 1985, he has been involved in HIV research as a participant for over three decades and as a community investigator over the past two decades. Darren has been a member of several councils, boards, and committees, including the UBC Health Council and UBC’s Patient and Community Advisory Committee, and serves as a mentor to students and future care providers. Darren believes that research is essential to supporting and improving the wellness of people living with HIV. He is committed to working with investigators to improve their research and make it more meaningful for the communities they strive to help. 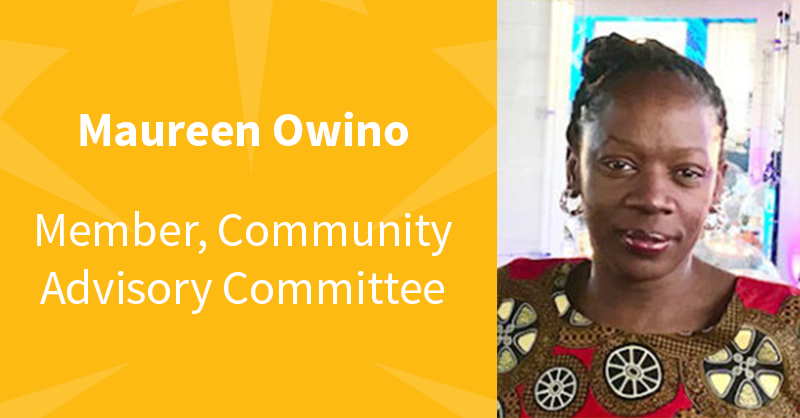 In 2021, we welcomed three apprentice members to the CAC 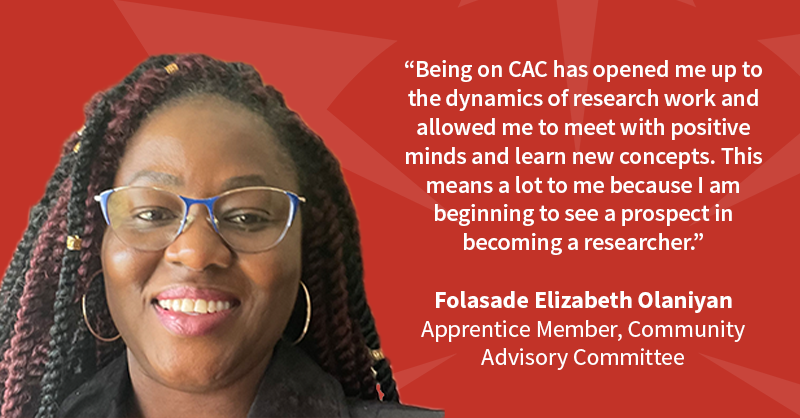 In addition to her role as an apprentice member of the CAC, Folasade Elizabeth Olaniyan worked as a dental hygienist and is pursuing a career in medicine, currently in her second year of training. She is a peer research associate and has volunteered with several AIDS communities. Folasade is a mother of two and a Sunday school teacher. She has been living with HIV since 2006 and, when she is not working or studying, she loves to travel. 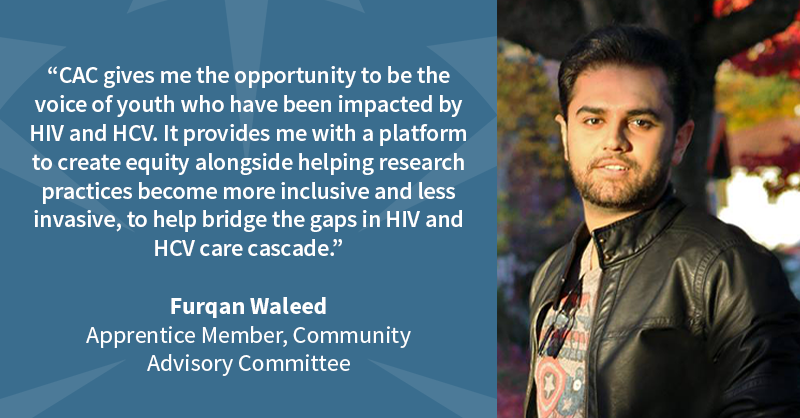 Furqan Waleed is an immigrant settler who moved to the xʷməθkʷəy̓əm (Musqueam) territory, currently called Vancouver and the surrounding areas, in 2013. He is a recent graduate from Simon Fraser University in the Molecular Biology and Biochemistry program. Furqan’s skills are complemented by strong ties to the LGBT2SQ BIPOC communities most affected by HIV and HCV, alongside his experience working with the youth-led HIV/HCV organization YouthCO as a program manager. He understands how stigma, oppression, and marginalization shape the impact of violence towards people living with HIV/HCV, appreciates the effects of social determinants of health, and is committed to meaningfully engaging with the community and building relationships that honour our unique histories and journeys in healing.

Furqan recently worked with the Interagency Coalition on AIDS and Development as the civil society member representing Canada at the UN’s 2021 High-Level Meeting on HIV/AIDS. This meeting resulted in the adoption of a new political declaration that will hold countries accountable in achieving the UNAIDS 95-95-95 targets by 2030. 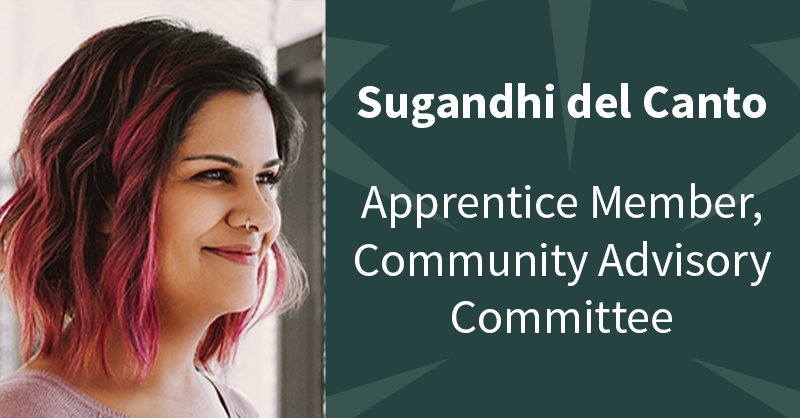 Avid knitter Sugandhi del Canto is a second-generation immigrant whose ancestors are from Sri Lanka, the Netherlands, Portugal, and Ireland. She has served the HIV community in many capacities since 2003, working with the Native Friendship Centre of Montreal, Canadian Treatment Action Council, CATIE, and the Saskatchewan HIV/AIDS Research Endeavour (SHARE). In addition to being an apprentice member of CAC, Sugandhi is the policy advisor at CAAN and serves on the board of the City Centre Food Cooperative, which provides affordable fresh food to people living in Saskatoon’s downtown and surrounding areas.